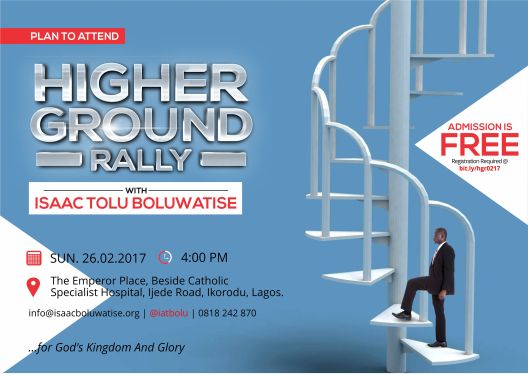 Many are about to receive a special visitation in a matter of days.
Hearts are about to be illuminated, enlightened, and encouraged

Bodies are about to be healed under the ministry of the powerful word of God.

Gaps shall be bridged between your existence and God’s purpose for your life.

A higher ground of Kingdom relevance and existence to God’s glory awaits you.

All these and more according to your faith and expectations are going to be made real from 4:00 pm this Sunday, 26th February, 2017.

The venue for the event is The Emperor Place, Beside St. Raphael Divine Mercy Specialist Hospital, Ijede Road, Ikorodu, Lagos.

God is set to initiate the fulfilment of some of His plans for your life. These plan shall be seen by all around you to the glory of God.

Arrivals and Registrations of attendees and check-in for online preregistered attendees start at 3:00 pm.

Music shall be on before the clock hits 4:00 pm.

Departures from the venue shall be before the clock stikes at 6:00 pm

Registering online before the day is an advantage. It helps you to beat the queue for registration at the venue. Your confirmation happens just in a few seconds.

While admission is free, registration is required for everyone above age 16.

You, your friends, and loved ones can still register now at http://bit.ly/hgr0217

You can complete the registration in just few minutes.

Don’t forget to share this information with those who are significant to you. You will be glad that you carried them along.

Remember to pray with expectation in preparation for the event.

See you there on Sunday.

Greetings to you in the name of our Lord Jesus Christ.

This is to invite you to the Higher Ground Rally, an initiative through which we teach and challenge the Disciples of Christ to live practically and optimally and to bridge the gap between their existence and their calling.

Through the Rally, we raise the bar for practical Christian living, by helping people to realise that there is more to life than the current sphere of experience, that they might break beyond the status quo by being all out, both in obedience and service, to the kingdom of God and for fulfilment of His will and glory in their lives and their generation.

We seek to accomplish these by exploring and practically applying models and principles from the scriptures to aid the contemporary person.

This edition is a must attend as it promises to lead you into relating with How God Initiates the Fulfilment of His Plan on Earth.

While admission is free for everyone, registration is required for everyone above age 16. You can register at http://bit.ly/hgr0217

Where order is recognised, corporate success and individual fulfilment will be inevitable.

Every group or team exists as a community for its members to remove them from being solitary to being in a functional social entity. The advantage of this ranges from group identity to interpersonal collaborations. The advantage of collaboration is enormous; it brings to the table the gains which transcends the sum total of the accomplishments of the individuals within the group.

The church of Christ is a community, a kingdom community. Its existence and business is with the objectives of God’s kingdom. Hence, the concern is not for individualities or vain self-seeking but for the togetherness which focuses on the common good.  It actually exists on earth through the local churches as earthly outstations of the heavenly kingdom. The togetherness of its members is for the purpose of winning with the kingdom assignment on earth. For this to be a few factors must come into consideration. Crucial among the factors is the understanding of the ethos of the kingdom.

Jesus pointed to this ethos in Matt 6:9ff by saying in the Lord’s prayers that “thine kingdom come, thy will be done on earth…” and later in the same context, “… thine is the kingdom, the power and the glory ….”. The Lord’s prayer actually reverts the mind of everyone that is a follower of Christ and that also prays like Him to the theocratic governance that God preferred under the Old Testament. In that system, leaders were selected by God; the culture of spiritual authority and the attending godly submission and followership was embraced.; team spirit was understood for the purpose of advancement and conquest; support for leadership was a necessity for the corporate good, and an atmosphere where rebellion and ungodly dissent thrives was discouraged. Look closely at Joshua 1:16ff and you will see these clearly there.

When Jesus came, he announced the subject of His concern as the kingdom of God (Matt 4:17,23) as it was even with John the Baptist (Mat 3:1-3). From these texts you can see that 1). The kingdom belongs to God, and that 2). We turn towards the kingdom by repentance (thinking differently; changing one’s mind for better; amending with abhorrence of one’s past sins heartily). Matt 4:23 in the message translation says the theme of Jesus’ teaching was the kingdom of God. Why the kingdom of God?

The kingdom has its attributes, some of which are reflected even in the earthly kingdom. The kingdom introduced by Christ and emphasised in His teachings is the realm which God rules over. It is an orderly system characterised by God’s righteousness; wherein authority is by delegation and not usurpation, wherein everyone is supposed to have a delegation which varies in levels and focus and wherein everyone serves God by the delegation he has received. What delegation or charge has God given you? Are you giving it your best as the day approaches when everyone shall render his account to God – Rom 14:7-12.

If the kingdom of God is an orderly system, its order must characterise our togetherness today. One of the order is the place of authority and leadership in the kingdom. Jesus gave the charge about servant leadership (where leaders exist to serve the people with the charge and grace they have received from God.) but also gave indications concerning the place of authority. Matt 8; Jn 21:15-21; Eph. 4:11-

Whether it is in the church, in the family or in other organisations, the place of order must be understood if the will of God will be done on earth as it is in heaven. Order is a principal key for a team to be distinguished (Joel 2:1ff). When order is present, rank is not broken and the people are not injured. God is not an author of confusion, neither does he abide where rebellion and ungodly dissent thrive. More so from the church, the example and the standard of order must go forth if the church shall fill its place on earth as the pillar and ground of truth. Where order is recognised, corporate success and individual fulfilment will be inevitable.